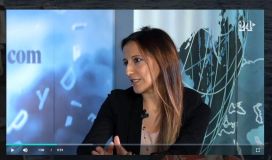 She graduated in Law from Bocconi University and received her PhD in Constitutional Law from University of Milan. She was Visiting Scholar and Guest Lecturer at Fordham Law School, where she focused on Citizenship and fundamental rights, and Visiting Fellow at the London School of Economics and Political Science.

Assistant Professor of Constitutional Law from March 2013 to August 2020. Since 2013 she has been a member of the faculty of the Phd in International Law and Economics at Bocconi University. From April 2011 to February 2013, she was researcher with grant in Public Law at the University of Insubria.

In 2020 she won as co-principal investigator the European project Global Digital Human Rights Network, funded by the European Cooperation in Science and Technology (COST), where she is now Managment Board member for Italy. In April 2019 she won as Head of Reseach Unit on Big data and power dynamics the Prin project Governance Of/Through Big Data: Challenges For European Law.

Works authored by G. Romeo include:

The conceptualization of constitutional supremacy: global discourse and legal tradition. 21 German Law Journal 171 (2020); Sovereignty-based Arguments and the European Asylum System: Searching for a European Constitutional Moment?. 22 European Journal of Migration and Law, issue 1 (2020) 11-38 (with S. Penasa); Building Integration Through the Bill of Rights? The European Union at the Mirror. 47 Georgia Journal of International and Comparative Law 21-46 (2018). The Italian Constitutional Reform of 2016: an ‘exercise’ of change at the crossroad between constitutional maintenance and innovation, 2017 Special Issue, The Italian Law Journal 31 (2017); (with E. Mostacci) A Br-Exit Strategy: Questioning Dualism in the Decision R (Miller) v. the Secretary of State for Exiting the European Union, European Papers 1 (2017); Measuring Cosmopolitanism in Europe. Standards of Judicial Scrutiny Over Non-Citizens' Rights, in Cambridge Journal of International Law, 2014, vol. 3, 907-928; The Internet and Constitutional Law: The Protection of Fundamental Rights and Constitutional Adjudication in Europe. London: Research in Constitutional Law Series, Routledge, 2016 (ed. with O. Pollicino).

(The list of prof. Romeo's publications is available at her personal page).